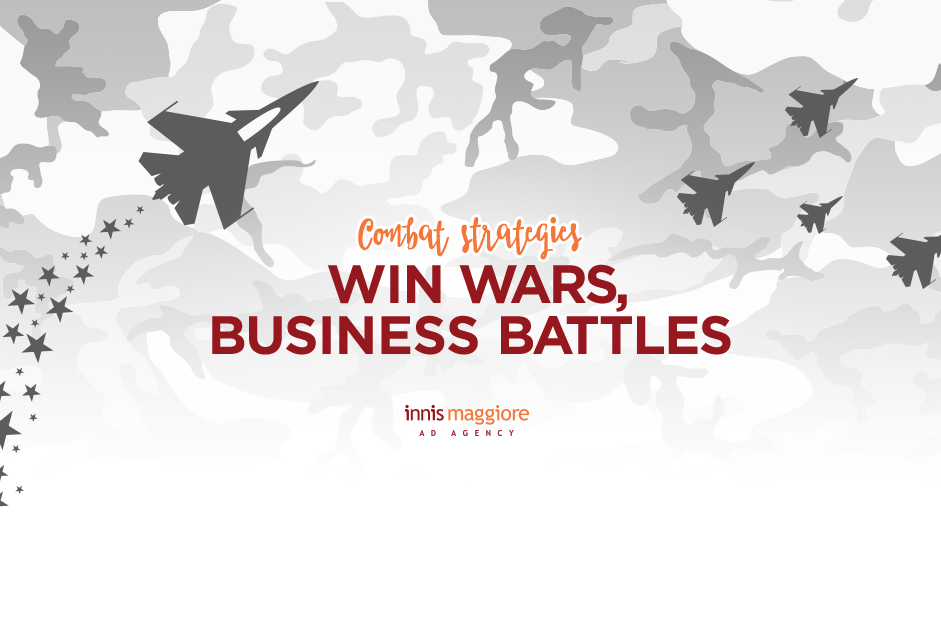 Business marketers must know how to play offense and defense, and when it’s best to flank foes. Combat strategies win wars and help gain a competitive advantage in business.

The competitive nature of business is such that it’s understandable for business people to compare marketing to war.

As in any competition, business marketers must know how to play offense and defense, and when it’s best to flank their foes.

The amount and level of competition is growing at fever pitch. There’s pressure to increase the quality of products and services while reducing the price. If you don’t, someone else will. So, how do you win in this ever-spiraling raising of expectations?

It is not easy. That’s why, according to Bloomberg, eight out of 10 entrepreneurs who start businesses fail within the first 18 months. That’s an 80 percent crash-and-burn. It gets worse. Only 4 percent of businesses make it past 10 years.

The problem for failed businesses is they often have no real differentiation. Rosser Reeves, advertising agency executive and pioneer of television advertising and after whom Don Draper of “Mad Men” was modeled, had a name for it. He called it the USP — the Unique Selling Proposition.

Businesses need a competitive mental angle. Think of it as a position in the minds of your prospects and customers.

We need a competitive advantage in business.

Let’s say your business is No. 2 or 3 in a given field. You should play offense. You need to go on offense and take market share away from others.

No. 1 holds the most market share, so it would be a good one to go after. Problem is, they are No. 1 for a reason: They are strong. Your strategy should be to find an inherent weakness in the leader’s strength and attack at that point on as narrow a front as possible.

Here’s an example: McDonald’s is the No. 1 burger joint chain. Burger King is No. 2. So Burger King must find a weakness in McDonald’s strength and attack at that point. BK’s most effective challenge was a campaign that implied its flame-broiled burgers tasted better than McDonald’s fried burgers. The ad said, “Broiling not frying.”

McDonald’s filed a lawsuit, and it was all over the news. It was the best thing that could have happened to Burger King — free publicity to drive home the point. Burger King’s sales jumped 10 percent, and the company gained market share on McDonald’s.

OK, what if you’re No. 1, the leader? No. 1 plays defense. No. 1 must defend its leading position. No. 1 should come out with products and services that compete against itself. The best defensive strategy is the courage to attack yourself — a preemptive move.

Think innovation. Keep coming up with innovative improvements in your products and services that obsolete your existing ones. This helps you gain a competitive advantage in business.

Netflix obsoleted its business of mailing compact discs with its online streaming, which proved to be a very good decision. Hallmark’s e-cards are taking a bite out of their traditional greeting cards. Better them than to give it away to other online retailers.

That’s a cacophony of options, but it has worked to keep Gillette the No. 1 razor company in the world with its brand value alone worth over $20 billion.

Moving up through ‘flanking’

If your business ranks lower than third in your marketplace, you might consider flanking.

A good flanking move is made into an uncontested area. Think Apple’s iPod, the first MP3 player. It was a surprise attack.

Low price can be a flanking move. Southwest flanked the airline industry with low price and has been profitable for 43 consecutive years.

Or it can be high price. Just ask Orville Redenbacher. It’s label used to say it cost 2½ times more than other brands of popping corn.

A new way to distribute a product or a service can be a flanking move. Michael Dell flanked the computer industry by selling computers direct to consumers.

Owning an attribute that is highly relevant and desirable to your prospects and customers is a great start in winning marketing warfare. Roll around in the mud of your marketplace and find your difference.

After all, combat strategies win wars and help gain competitive advantage in business.

Previous Post
←  What we can learn from Xerox and brand failures
Next Post
Brand extension can help growth, but keep your focus  →
PositionistView®
VIEW ALL RSS