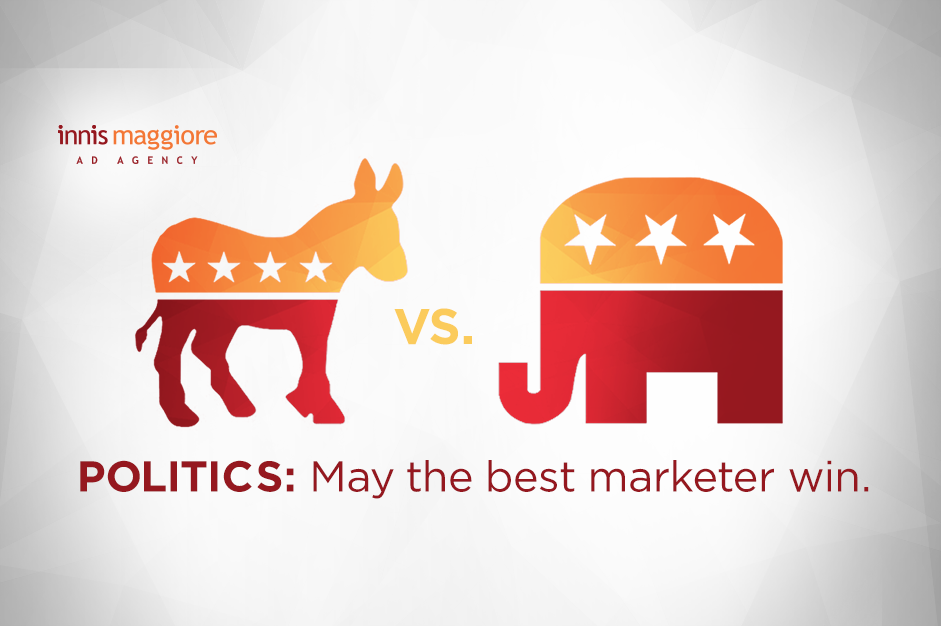 We just couldn’t help ourselves. The 2016 presidential election campaign is like no other. Looking at the campaign from a marketing perspective, we can begin to understand how a businessman with no political experience is able to compete with one of the most politically experienced candidates ever.

Trump vs. Clinton: The better candidate doesn’t win, the better marketer does, declared Ad Age Editor in Chief Rance Crain and Al Ries, chairman of Atlanta-based marketing strategy group Ries & Ries. The one with the best competitive positioning strategy will stand out.

Well, it turns out that we do.

We don’t always know, can’t or won’t say why we buy, believe or vote the way we do.

Seems we rationalize our behavior when the true reason is deeper and more irrational — more on the emotional side.

A brand is born and built by differentiating itself from the competition. We have learned over many years that a brand can’t be all things to all people. If we’re looking to get as many votes as possible, don’t we want to be as many things to as many people as we can?

Let’s compare their campaign slogans. Clinton’s is “Stronger together.” We get it. But there’s no controversy. It’s bland, even forgettable. Trump’s “Make America great again” implies that things aren’t good today. There’s some controversy. It’s arguable.

The emotional motivator is to give us confidence in the future.

The way to build a brand is through public relations. Public relations is driven by news. One way to create news is through controversy. According to the New York Times, this has resulted in more than $2 billion worth of free media for Trump.

He has differentiated himself by focusing on a highly controversial and divisive issue from the beginning: illegal immigration. We’ve all heard it. He’s going to build a wall, and Mexico is going to pay for it. Trump’s simplistic ideas create intense emotion.

Clinton, on the other hand, is a self-confessed policy fanatic. She’s not been nearly as controversial, nor has she focused on any single issue. Instead, she’s trying to appeal to as many people as she can. She’s giving away all kinds of goodies to children, students, moms and dads and retired people. As with the marketing of products and services, the more people to whom she tries to appeal, the more she runs the risk of appealing to fewer.

Decisions are driven by emotion, then rationalized. It might seem Trump is winning on the emotional front. Hold on. Clinton might have found an emotional counter. It might prove to be Trump’s demise.

A key marketing principle is in play: Find a weakness with the competition and attack at that point on as narrow a front as possible. Is it Trump’s temperament? She asks the American public if he is unfit for the White House. Is he the person we want with his finger on the nuclear trigger? That’s emotional. That’s a powerful counter. “Feeling secure” is an emotional motivator.

Scope mouthwash asked us if we like smelling like Listerine’s “medicine breath,” a powerful punch. Listerine countered with “the taste you hate twice a day.”

Clinton might have found the powerful counter, just as Listerine did with Scope.

What Trump lacks in policy details he seems to make up with his simple, visceral ideas.

Trump’s big mistake is his uncontrollable need to respond to opposition, reinforcing his lack of self-control. This gives legitimacy to Clinton’s argument. She might have hit the right chord with the emotion generated by promoting Trump’s lack of temperament.

Will these forces balance each other out and give us a very tight race?

What does win is the candidate with the better competitive positioning strategy.