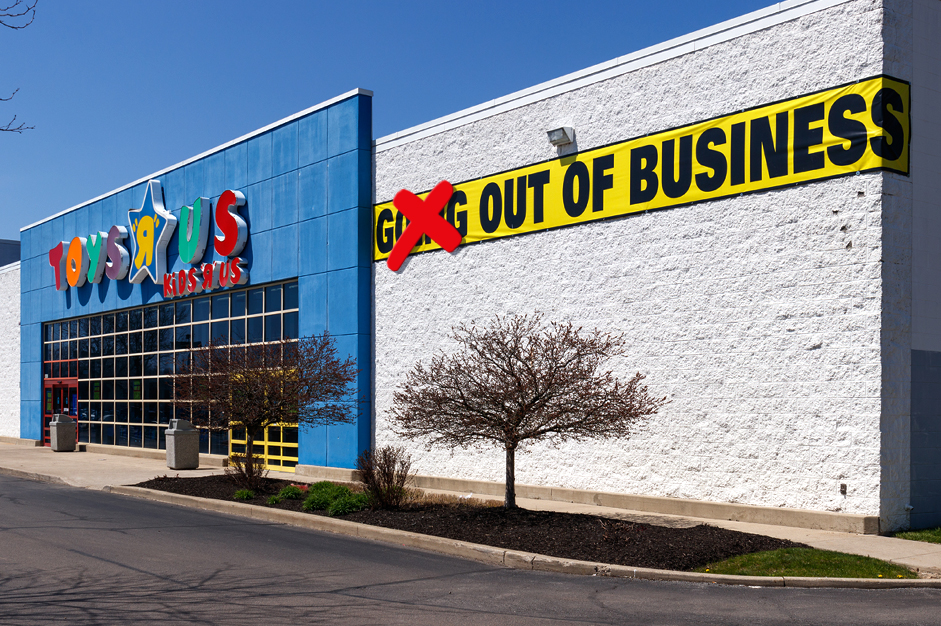 Beyond my office window, directly across Whipple Avenue, sits the once mighty, and now vacant, Toys “R” Us building.

How did this happen? What went wrong? What can we learn from brand repositioning misses?

Toys “R” Us took root in 1957, in the midst of the baby boom, when Charles Lazarus opened his first big-box toy store. Three decades later, he had more than 900 stores and 30,000 employees across our country.

The mom-and-pop toy stores couldn’t compete with the massive buying power of Toys “R” Us along with its abundant selection of toys.

Toys “R” Us is a shining example of focus. It was “the” focused specialist.

The toy empire reigned for four decades. It did everything right. It was devoted to customers and vendors. It was admired across the business community.

What could possibly go wrong?

Often, market leaders get a feeling of invincibility. Many rest on their laurels. Toys “R” Us got lazy. The love and devotion began to wane. The shopping experience became stale.

Many think Amazon killed Toys “R” Us, but it was Walmart that threw the first devastating punch. By 1998, Walmart surpassed Toys “R” Us as the country’s No. 1 toy seller.

Walmart is a mightier force, with total annual revenue at that time approaching $200 billion. Toys “R” Us was around $7 billion. Walmart could afford to sell toys at lower prices than Toys “R” Us, even take a loss, because shoppers were likely to buy higher-margin products while in Walmart. Target and Kmart made similar moves.

One of the key marketing strategies the market leader should employ is to block strong competitive moves. As soon as Toys “R” Us began noticing threats, they could have blocked. An important element in brand repositioning misses.

With their tight focus on “toys,” they were in the best position to add magic to the toy shopping experience. Such theater might have been enough to make up for their higher prices. Think Starbucks. Toys “R” Us should have invested in the customer experience.

Lowering prices would have helped as well. It’s better to have lower margins than no margin at all, which is what ultimately happened.

Next, in the 2000s’ dotcom bubble-and-bust period, Toys “R” Us feared an online toy seller, EToys.com with a market capitalization that surpassed Toys “R” Us in just a few short years.

In reaction, it made, what turned out to be, a disastrous deal to sell its products exclusively on Amazon, which didn’t honor the deal and began selling toys in its new Amazon Marketplace.

When the deal finally was dissolved, Toys “R” Us couldn’t make up lost time and earnings and never did get enough traction online. Amazon and Walmart beat them in the online race.

Technology struck again. Children began preferring tablets, video games and smartphones rather than traditional toys, figures and board games. Parents took them to Best Buy instead of Toys “R” Us. The traditional toy industry has been contracting year after year for more than a decade.

Toys “R” Us had an opportunity to reinvent itself. Actually, it would have been more of a reposition. Toys “R” Us could have focused on toys for the bigger kids. Best Buy introduced the Geek Squad in 1994. Had Toys “R” us instead developed the Geek Squad to go along with the shift in products to include more electronics, preempting Best Buy while repositioning itself, Toys “R” Us might still be with us.

By 2004, the final shoe dropped. The continuing downward trend was bait to a group of private equity firms. They took over the company in a $7.5 billion leveraged buyout. They bought Toys “R” Us, in part, using Toys “R” Us’ own assets, such as its real estate properties, as collateral for financing the buyout.

This resulted in Toys “R” Us paying $400 million in interest on about $5 billion of debt every year for a decade. That, along with the other issues facing the company, crippled Toys “R” Us.

While all this was going on, Toys “R” Us began depending on income from its sister company, Babies “R” Us, until its business, too, was disrupted. Remember Diapers.com? Mothers loved the convenience of purchasing diapers and many other baby and toddler products online. Amazon was smart and acquired Diapers.com. Babies “R” Us stores also are closed now.

Trends can’t be bucked. Ask Kodak or Blockbuster. Both of them might still be in business had they reinvented themselves. But, like Toys “R” Us, they didn’t.

Now-defunct brands could have embraced change and adjusted their product offerings to appeal to the changes in customer preferences and tied this into reinvented customer experiences. They could have included full integration with online buying.

Specialty stores aren’t dead. Lego stores are a subcategory of toy retailers, even more restrictive. They are thriving, as are Apple stores. One difference is they ratchet up the experience. An element forgotten in many brand repositioning misses.

Many remember the Toys “R” Us mascot, Geoffrey the Giraffe, and even recall the jingle, “I don’t want to grow up; I’m a Toys “R” Us kid.” Generations looked forward to walking the aisles during the Christmas season, showing their parents what they liked.

That is now an era gone by. Might it return?