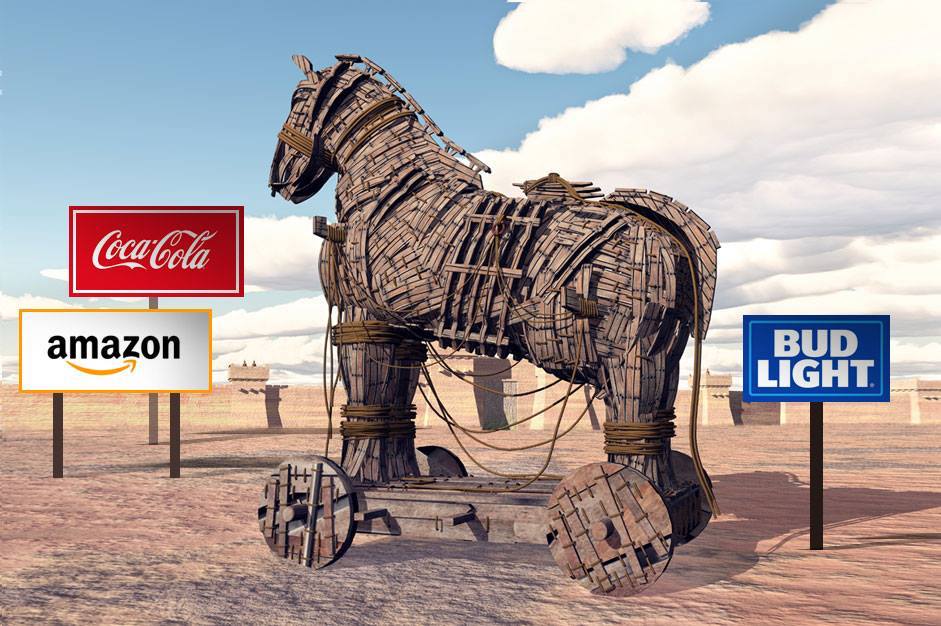 Silly and sentimental. Advertisers play it safe this year.

According to Nielsen, 51 percent of viewers prefer watching the Super Bowl commercials to watching the big game itself.

Super Bowl advertisers are known for using Trojan horse strategy to slip their ad messages inside our gated minds.

The strategy relies on creating commercials so entertaining and popular, culturally or socially relevant, silly or sentimental that viewers actually want to pay attention.

More advertisers went for the silly and sentimental this year than last. Let's take a look at Super Bowl advertising effectiveness this year.

The latest ad in Bud Light’s “Dilly, Dilly” series, “The Bud Light Knight,” disappointed. We’re still trying to figure out what happened. Not all is lost. The campaign is already a popular winner.

The Clydesdales were booted in favor of “Stand By You,” an ad about Budweiser’s water giveaway response program. It’s a sentimental ad, but it doesn’t sell beer. In 2017, Budweiser fell behind Miller Lite to become the nation’s fourth-best selling beer. Maybe making better beer would help. (If you really miss the horses, you can get them online in a commercial titled, “Beer Country.”)

“This is the Pepsi your father drank, and his father drank before he met your grandmother...” Talk about how to kill a brand. Old celebrity throwbacks and the revised end line, “This is the Pepsi for every generation,” only make matters worse. Created by Pepsi’s in-house agency (Assassins!), this spot is a dismantling of the brilliant positioning that made Pepsi Pepsi, and not Coke.

Coca-Cola’s ad, “The Wonder of Us,” is a Hallmark Channel kind of ad that celebrates individuality and diversity. It is consistent with, though less controversial, than last year’s ad, “America the Beautiful.”

Backlash in the Car Category

The Martin Luther King voiceover on the Dodge Ram truck ad has been met with immediate media backlash. Many feel the appropriation of Rev. King’s speeches to sell trucks is out of place and time. Strangely, Fiat Chrysler ran a 2018 Jeep Wrangler ad that seems to be a major put down of the Ram ad: “How many car ads have you seen with grandiose speeches and big declarations...making claims to some overarching human truth...companies call these manifestos...” Did anyone at Jeep see the Dodge Ram commercial?

Wix.com squarely wins over Squarespace. The ad, while highly entertaining, is also informing. It shows the potential customer exactly what can be done with Wix.com. What can you do with Squarespace? Ride freestand on a motorcycle?

We love that the positioning is obvious and competitive. But this spot makes the viewer do all the work, which is a criminal act. This is Super Bowl advertising effectiveness at it weakest.

Febreze: “The Only Man Whose Bleep Don’t Stink” This is an ad destined for cultural fame. The product and the position make a late appearance in the spot — but it’s enough to make the point: For people whose “bleep” does stink, you need Febreze.

Doritos/Mountain Dew: “Dorito’s Blaze vs. Mountain Dew Ice” Peter Dinklage delivers Busta Rhymes’ tongue-twisting verse from Chris Brown’s “Look at Me Now” to promote Doritos Blaze, and Morgan Freeman raps Missy Elliott’s “Get Ur Freak On” for Mountain Dew Ice. It’s a big, bold, loud and funny ad that stands out and should do well for sales of both products.

Amazon: “Alexa Loses Her Voice.” With nearly 70 percent market share, Alexa is the leader in the category of the voice-activated personal speaker market. This is a category-building ad that makes sense for the leader. The ad is as informative as it is entertaining, showing us all that Alexa can do — play music, call friends, turn on lights and more. Jeff Bezos is a pretty good actor, too.

Tide overtook the Super Bowl, running four ads, one per quarter featuring a running joke parody of all other Super Bowl ads. It epitomized Super Bowl advertising effectiveness. David Harbour (“Stranger Things”) teases the audience, “Yeah, just your typical Super Bowl car ad...or a hilarious beer ad...nope, it’s a Tide ad.” It’s a Tide ad because of all the clean clothes. Persil, which made a much better commercial this year than last, didn’t stand a chance. Tide dominated.

While this year’s game was far more exciting than most, the TV commercials were definitely entertaining enough to make us pay attention.