The problem with mass marketing has finally been solved. The answer is programmatic advertising.

Imagine two neighbors. Both watching ESPN. One sees your ad. The other doesn’t. The first is your target audience. The other isn’t.

The promise of programmatic advertising has finally reached marketing nirvana. The age-old problem of wasting 50% of your marketing budget on zero-value impressions is over.

A Brief History of Programmatic Advertising

2007… the release of Apple’s first iPhone. And the year Android’s mobile operating system was released. Early mobile screen adoption had been slow, but these two releases catapulted the market. It only took five more years for the inflection point, when 2012 was dubbed “the year of mobile.”

A Convergence of Programmatic Events

In 2017 — ten full years after Google’s big bet when it bought the digital ad exchange, DoubleClick — the inflection started. The downsides of programmatic advertising had been acknowledged and to a great extent, remedied. Consumer adoption of “new” services and about a half dozen technological enhancements made programmatic attractive to advertisers… again. Here’s a list of a few of those happy occurrences:

If you’re new to programmatic advertising, this infographic shows the basic components of an online consumer profile. It combines the screens used by the consumer, the content consumed and in-depth geographic, demographic and psychographic data points. This powerful combination allows an advertiser to target audiences in a very precise manner (B2C or B2B). 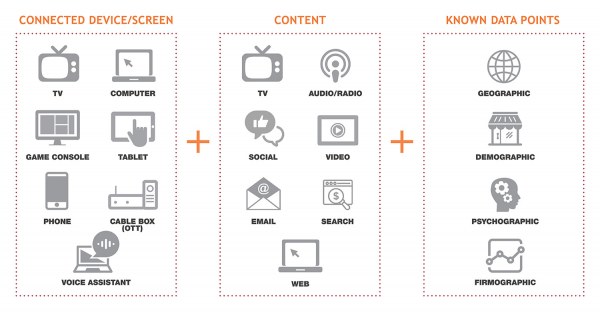 2020 isn’t a year any of us will remember fondly. However, it supercharged programmatic advertising. Lockdowns meant more screen time on all devices. Like the hyper-adoption of Zoom, Microsoft Teams and other web conferencing software, programmatic shot up almost 10% over 2019, a rather amazing increase given that 49% of all ad dollars in 2019 were already spent in digital advertising. Linear advertising (aka traditional media) fell over 16%.

Now that digital advertising is more than half (58%) of all ad spend, and programmatic is almost 88% of digital, it’s fair to bestow the title of 2020 as the “year of programmatic.” The inflection point is now complete.

“We’re well past the years of brand safety issues, ad fraud and privacy breaches,” said Rose Browning, Director of Media Services at Innis Maggiore. “Programmatic has changed media buying and it’s only going to increase as a portion of advertisers’ budgets. I think once advertisers are used to being able to turn on and off their ads based on proven success — and do so in a matter of minutes — they will keep using these methods.”

Browning continued, “The C-suite wants accountability more than ever. With the frequency of business environment changes and demands from clients, advertisers have to be more responsive than ever. If the CEO says go, we might be asked to deploy a new campaign within a few days. Rare will become the days of 6-month production shoots and upfront media buys.”

The programmatic advertising revolution is here. Advertisers now understand the power of the stitching together of screens into a single investment decision and a single view of the customer.

With all the change that came in 2020 and more people in front of screens than ever before, it was certainly programmatic’s year to shine.

Innis Maggiore offers connected TV, audio advertising, display, social, native, paid search and other programmatic media strategy, planning and buying. For a FREE consultation to see if programmatic might be right for you, contact Mark Vandegrift.

P.S. For all you data nerds! If you want to see a full data assessment of 2020 against previous years and across the globe, download MAGNA’s Global Advertising Forecast (updated Dec. 7, 2020) here.