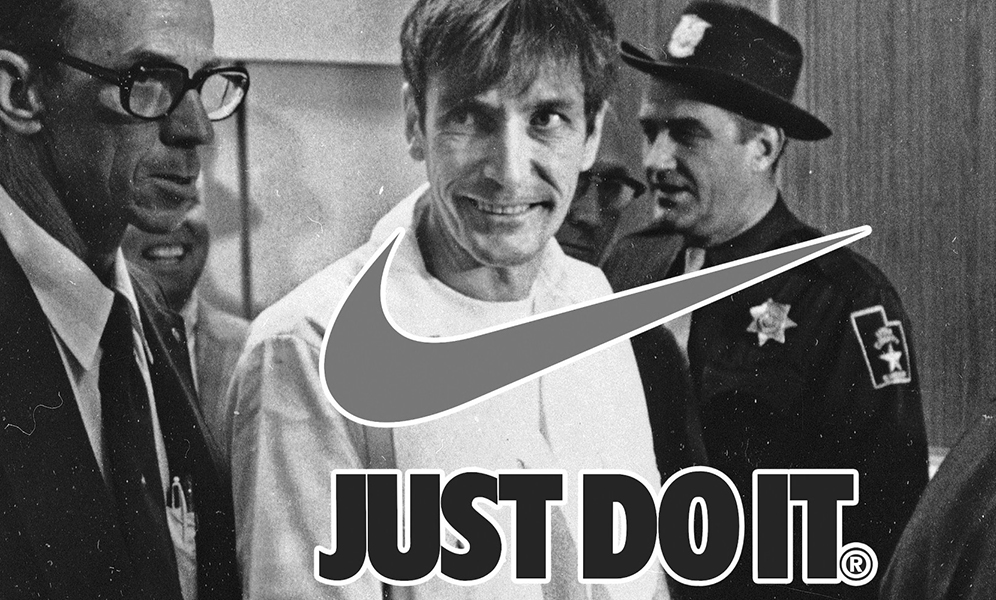 Nike Tagline: How to execute the perfect tagline

Gary Gilmore was strapped to a chair on the morning of Jan. 17, 1977, wearing a T-shirt and a bag over his head. He was to become the first person in the United States to be executed in a decade.

He murdered a motel manager and a gas station attendant for no apparent reason and insisted he be put to death. On the morning of his execution, Gilmore was asked if he had anything to say. His last words were, “Let’s do it.” He didn’t flinch when the firing squad shot him.

In 1980, Nike outsold Adidas and became the top-selling sports apparel brand in the U.S. Nike put its shoes on sport celebrities from track star Carl Lewis to basketball phenomenon Michael Jordan. But in 1987 and 1988, sales dropped off and Nike lost its leadership to Reebok, the brand that capitalized on the aerobics and fitness craze of the late 1980s.

The agency needed to come up with a new campaign. Wieden remembered Gilmore’s last words, “Let’s do it.” At the same time, he also thought of Nancy Reagan’s “Just Say No” campaign encouraging young people to say no to drugs.

Creative folks are known to retie unrelated ideas into new original ideas. He did a mashup. The result: Nike’s famous “Just do it.”

Wieden simultaneously made another connection, which gave the new tagline meaning, and that’s why it worked. The new tagline was connected to Nike’s “why.”

Wieden thought of Gilmore’s “Let’s do it” as the ultimate act of intention. It captures the “I’m in control” attitude. Changing the “let’s” to “just” for Nike made it personal. Nike is about individualism. And it all lined up under Nike’s belief about giving inspiration and innovation to every athlete in the world.

Nike says, “If you have a body, you’re an athlete.” That speaks to everybody. The Nike brand is about overcoming weakness to achieve greatness. It’s empowering. It leaves no room for excuses. Nike knows and embraces the position its brand owns in the minds of its customers.

“Just do it” just did it for Nike. Over the ensuing 10 years, annual sales went from $900 million to more than $9 billion.

Nike uses real people and athletes in its advertising imagery. It’s about an attitude rather than the actual athletic performance. “Just do it” extended Nike’s brand appeal from professional athletes to real people. We feel we can run a little faster and jump a little higher when we’re wearing Nikes.

Today, Nike is the world’s most valuable sports and apparel brand. Its brand value alone is more than $32 billion.

Nike has stuck with its tagline for just over 30 years. That’s smart marketing.

Then there is the case of BMW, a brand that changed its tagline. The original tagline, “The Ultimate Driving Machine,” was brilliantly aligned with the brand’s “why” and position. It was wildly popular, and sales were strong.

BMW had been using its famed tagline since 1975. For years, BMW was the No. 1 selling luxury car in America.

For reasons we cannot explain or understand, BMW changed the tagline.

BMW dropped “The Ultimate Driving Machine” in favor of “Joy.” It sounds a little like the feeling you get when you swig a Coke. Sales dropped. They tried another tagline, “Sheer Driving Pleasure.” And another, “Driving Luxury.” Their latest is “Designed for Driving Pleasure.” We’re not holding our breath.

In 2011, Mercedes-Benz moved to the No. 1 spot. Over the next several years, Lexus and Tesla took turns with the top spot. BMW moved to the fourth position at one point.

The timing of the change from their beloved tagline lines up with their fall from glory.

Sometimes it’s better not to tinker.

Previous Post
←  Find your brand positioning: Play your Cs to win in marketplace
Next Post
Repositioning Can Deliver The Advantage Your Business Needs  →
PositionistView®
VIEW ALL RSS