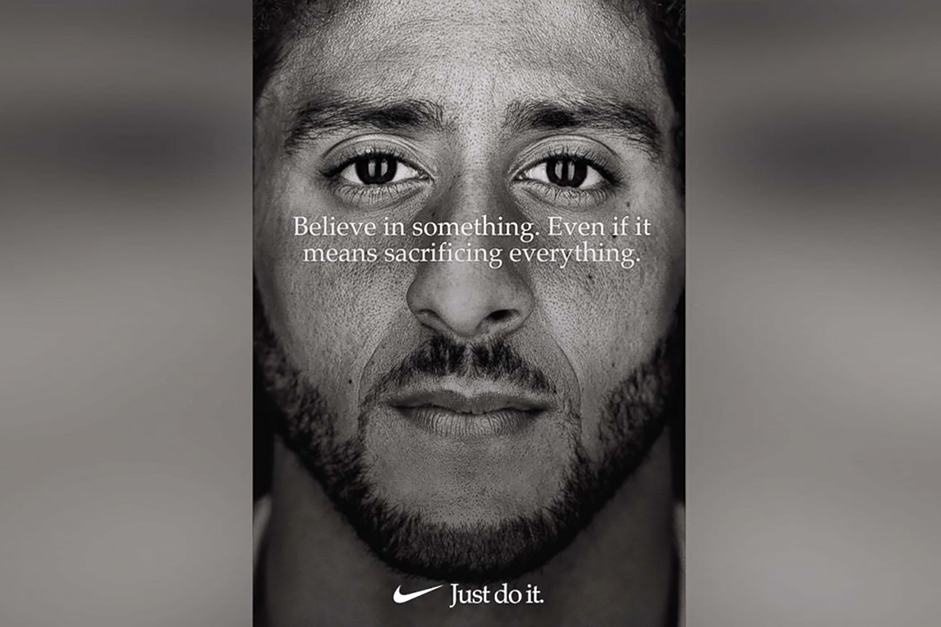 Nike just did it.

We were taught in business school not to mix the brand with politics. Conventional branding wisdom says it would be brand suicide.

Nike's 30th anniversary "Just Do It" campaign features an unretouched black-and-white close-up of Colin Kaepernick's face, highlighting the NFL kneeling controversy with the headline, "Believe in something. Even if it means sacrificing everything." There's much to learn from the Nike brand controversy.

Nike's Vice President of Brand Gino Fisanotti told ESPN, "We believe Colin is one of the most inspirational athletes of this generation, who has leveraged the power of sport to help move the world forward."

As is the case in many areas of our society these days, the Nike brand controversy has been polarizing. Some people interpret the campaign as disrespectful to our country, while others applaud it as representing the fight for social justice.

Will this prove to be the dumbest move in Nike's history? Will Nike be boycotted? Will this divisive ad, coming from a company still dealing with its use of non-unionized sweatshop labor, add fuel to that fire?

Nike has had other social challenges. About a dozen senior managers at Nike were fired due to sexual harassment allegations earlier this year. Women are suing Nike for a workplace toxic to their gender, including pay inequities.

After the Kaepernick ad debuted, customers began posting videos of burning their Nike shoes and cutting the Nike Swoosh off their socks. The stock dropped 3 percent the day the news broke.

We can't imagine the NFL or team owners are pleased with Nike. The company signed Kaepernick in 2011. Nike just signed a $1 billion plus sponsorship deal with the NFL that goes through 2028. Seems they're all stuck with each other.

The $36 billion athletic apparel company made a bold play — a calculated risk — it hopes will be on the right side of history.

Nearly 70 percent of Nike customers are under 35, ethnically diverse and skew progressive. They are Gen-Z'ers and millennials. They care about purpose-driven brands. More than half of all consumers consider their own values' congruency with the brand's or company's values and beliefs. The math looks like it's on Nike's side.

Predictably, the controversy blew up in social media and was Twitter's top-trending spot on Labor Day. There has been a 15-fold increase in the number of social media mentions. If getting a ton of free media exposure was part of the plan, then mission accomplished.

This is not to say a brand can pick any prickly topic and cash in. Consider Nike competitor Under Armour, which soon after the inauguration sided with President Trump regarding the travel ban. Under Armour's stock lost 50 percent of its value in 2017.

Here's the reason it's working for Nike: The message is in alignment with Nike's "why." The first athlete to sign with Nike was Steve Prefontaine in 1974. Steve was a rebellious, long-haired runner. The co-founder of Nike is Phil Knight, also a runner.

In 1993, Charles Barkley said in a Nike commercial, "I am not a role model. … Just because I dunk a basketball doesn't mean I should raise your kids."

Nike has teamed with other controversial athletes. It's Nike's "why." It's in its corporate DNA.

We don’t know whether Nike did this purely as a business move or because of its "why." We wouldn't nominate them for a humanitarian award. We strongly believe, though, it will prove to be the right business move. The Nike brand controversy could reap great rewards.

Most brands will do well to support a cause that fits with their "why" and with their customers. For most brands, the alignment will be with a non-controversial cause.

More controversial social issues, however, will increase engagement, especially on social media and with Millennials. But you must know your customer before taking a stand. Nike has consistently demonstrated it knows its customers.

But as we mentioned above regarding Under Armour, it’s not always a cut-and-dried matter when it comes to picking sides on divisive issues.

John Schnatter, founder of Papa John's, learned the hard way. His company ousted him, and so did the NFL. Pizza Hut is now the official pizza of the NFL. Elon Musk is riding a fine line with Tesla by sharing controversial opinions. Chick-fil-A's CEO made comments against gay marriage and several years later the fast food brand is thriving.

Sacrifice is key to great brand positioning. Your brand can't be everything for everybody. Choose wisely.