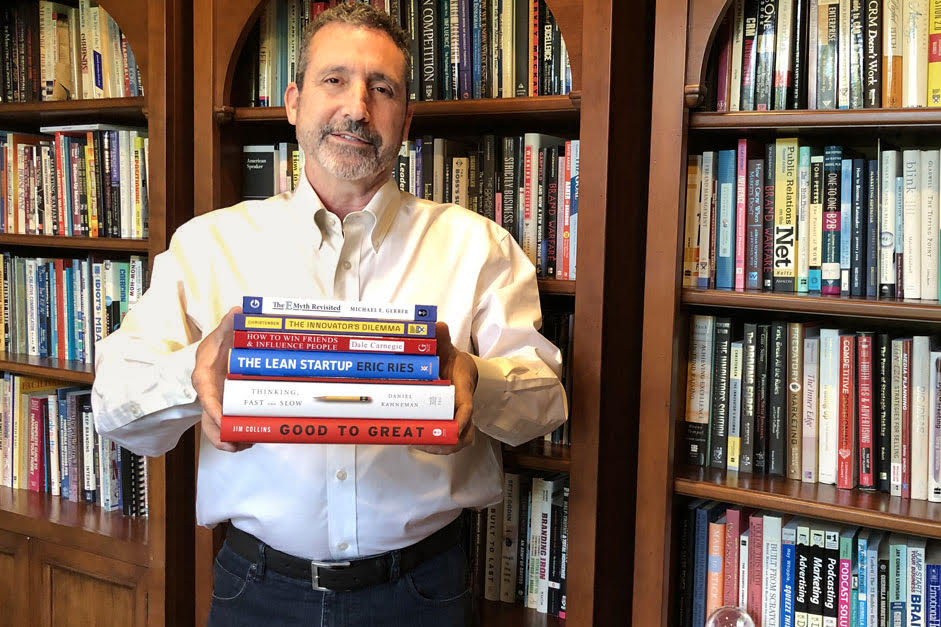 No less an authority than Warren Buffett believes reading is essential to business success.

A Columbia University student asked Buffett what he could do to prepare for his career.

Buffett thought for a few seconds and then said, “Read 500 pages a week. That’s how knowledge works. It builds up like compound interest. All of you can do it, but I guarantee not many of you will do it.”

His words echo Socrates: “Employ your time in improving yourself by other men’s (and women’s) writings so that you shall come easily by what others have labored hard for.”

Take the advice of Buffett and Socrates. We recommend starting with seven of the best business books of all time.

Collins and his team did considerable research to back up their conclusions. We particularly like the Hedgehog and Flywheel concepts. Find your thing, the Hedgehog, and keep focusing on it, the Flywheel. He also introduced what it means to be a Level 5 Leader. Leadership that is typified by a focus on the organization rather than himself or herself along with a professional will — a passion — to drive the organization to higher standards and results. Let’s not forget the BHAG. That’s the Big Hairy Audacious Goal. Every company needs a vision bigger than itself.

He believes we have two brains running: System 1 (fast thoughts that happen effortlessly, make snap decisions, intuitive, automatic and largely unconscious) and System 2 (slow, deliberate thoughts that involve logic and reasoning and take more effort). System 2 is lazy and often accepts System 1′s assessment, as irrational as it might be.

His thesis: Humans are fundamentally irrational and operate with 20 or so cognitive biases and fallacies, including “base-rate neglect,” “illusion of validity,” “availability cascade,” “planning fallacy” and “pervasive optimistic bias.” Such unconscious thinking errors distort our perception of the world and therefore our decision-making.

The “loss aversion” bias is our tendency to fear losses more than we value gains.

The book helps us understand more about how we make choices in business and our personal lives.

New ways of doing things, often with lower returns on investment, are ignored by the established company. Customers, however, are looking for improvements.

Innovator’s Dilemma was one of the few books that Apple founder Steve Jobs said deeply influenced him. Apple became the world’s most valuable company.

Today, it’s disrupt or be disrupted.

Most startups fail, many because the founders are emotionally stuck on their ideas and unwilling to pivot.

By shortening the product development cycle, the entrepreneur is able to discover more rapidly if a proposed business model is viable. This allows the company to iterate, test, measure, adjust and shift direction swiftly. Responding to the market quickly is key.

Startups that follow these guidelines, emphasizing rapid experimentation, are able to quickly discard failures ruthlessly and pivot to a new angle if necessary. These same principles apply to mature organizations developing new products.

Marc Andreessen, developer of the first widely used web browser and Silicon Valley icon, says the book is “a must read for every entrepreneur.”

What can business folks learn from a book written 600 years before Christ? Doubt exists that Sun Tzu existed, but the book’s insights profoundly influence not only military thinking, but also strategies for business, the legal profession, athletes, politicians and entrepreneurs.

The “Art of War” teaches business leaders when and how to fight our battles.

Here are a few strategic gems: Exploit your enemy’s weaknesses; avoid its strengths. Attack where he is unprepared; appear where you are not expected. Be decisive and quick. Concentrate your energy on as narrow a front as possible. Don’t attack someone just because they made you angry.

The book also teaches us to know when to fight and when not to fight. Care about your team, but also be tough. Hire great people, because weak, frustrated subordinates will cripple you.

6. “How to Win Friends and Influence People” — Dale Carnegie

This 83-year-old bestseller is chock-full of time-tested advice that has carried countless people up the ladder of success in their business and personal lives.

You’ll learn six ways to make people like you, 12 ways to win people to your way of thinking and nine ways to change people without arousing resentment.

The overriding narrative is to become “genuinely interested in other people.” Carnegie’s counsel is to practice being a good listener and encourage others to talk about themselves. Smiling and using the other person’s name are helpful in focusing your attention on the other person rather than yourself.

So many business owners got into their business because they were good at it. They knew how to do the work. It is that very strength that becomes a weakness because it limits the potential growth of the business.

“The fatal assumption is that an individual who understands the technical work of a business can successfully run the business that does that technical work. In order to run a successful business, you can’t remain just a technician,” Gerber wrote.

With more than 6,000 books published every day around the world, there are many more insightful books to learn from and enjoy. Be like Buffet and Socrates. Read and grow.